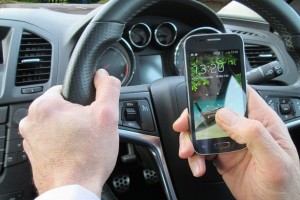 A Police operation in Brentwood as well as in other towns across the country, saw 21 motorists stopped for using their mobile phone whilst driving.

The penalties and fines handed out to offenders have been doubled to six points and £200 respectively.

It means that new drivers can have their licence revoked as they are on probation after passing their test for two years,which could now be the result of sending a single text or making a phone call.

The new measures have been introduced in the wake of a number of high profile cases like lorry driver Tomasz Kroker who killed a woman and her three children after ploughing into the back of  their stationary car on the A34 near Newbury Berkshire while using his mobile phone.

Research suggests that the practice is widespread and that 1 in 4 motorists admits checking texts,emails and social media while driving.

Your questions answered:
Can you use your phone at traffic lights?

No. Even when you’re stationary it is still classed as driving and you are still in charge of the vehicle so using your phone in traffic or at lights is still an offence.

Can you press buttons on your phone to answer/hang up a call on hands-free?

No. The phone must be secured in a holder out of the 45-degree angle of the driver’s view. You can’t touch it while driving.

Is it OK to answer a call while driving if your phone is on loudspeaker on your knee?

No. It’s still classed as using your phone while driving whether it’s in your hand or not.

Can you use your phone as a sat nav?

Yes, as long as you programme it before you start the car and set off and it’s in a holder out of the 45-degree angle of the driver’s view. You can’t reprogramme or touch it while in motion. The same rules apply for any sat nav.

So what do you do if you need to make or take a call?

You should really pull over and stop the car or leave it and let it to go to voicemail. If you must talk and have a hands-free phone, keep conversations short and simple or say that you’ll find a safe and legal place to stop and phone back.

It basically means mobile phone accessories that allow you to safely use a mobile phone without holding it, such as Bluetooth headsets and speakers. Using hands-free is not an offence, however, you can still be prosecuted if you’re seen not to be in control of your vehicle while using it.

What if I need to use my phone for work?

In that case, your employer could to be open to prosecution if they:

Cause or permit you to drive while using a phone or to not have proper control of the vehicle.

Require you to make or receive calls while driving.

Install a phone in your car that then causes you to drive dangerously while using it.

Is it the same for cyclists?

While it’s not actually an offence to use your phone while cycling, you could be prosecuted for careless or dangerous cycling.

What if it’s an emergency?

You can make an emergency call to 999 or 112 but only if it’s impractical or unsafe to stop.
#Brentwood & @saferbrentwood